This was more of my research into working sundials, which proved to be very interesting. This short video shows the time change from half ten through to half eleven.

This was a DIY compass I made for research into my Ponoko project. My project is looking at making the sundial a more portable and functional object. Part of the function of a sundial is for it to point in the direction of north. This is one of the simplest ways to find north. Magnetize a nail or pin by rubbing it with a woollen fabric, place it on a piece of paper in a shallow pool of water, then just sit back and watch it work.

This is another example of the type of work possible from our Ponoko project. It is a light shade designed from flat sheets of laminate which can be constructed without any tools.
Lars Contzen (Germany)
Posted by Paul at 03:07 No comments:

This is a lamp shade by Birgit Østergaard was made from a long flat sheet of wood, although when constructed it makes an attractive three dimensional form which in essence is what we are trying to achieve for the Ponoko project.
Posted by Paul at 02:47 No comments:

This is one example of work by interior designer Louwrien Kaptein (Netherlands).
His flat pack work ties in well with the current project I am working on for university.
Posted by Paul at 02:44 No comments:

My current university project involves working with Ponoko, a New Zealand based mini-manufacturing community, the project asks us to design, visualise, prototype and produce an “open-source design” for the office garden or design studio.
For my project I am looking at time, in particular time as a constraint on the office or design studio. Initially I wanted to make a sundial for the Garden and through my research and observation I have noticed that sundials in general are; large, heavy, solid, fixed, sculptural and complicated. This has inspired me to try and challenge the perception of a sundial and turn it into something entirely different which would work witin the constraints of an office or design studio.
Posted by Paul at 02:04 No comments:

I really like this design for a bird house by Dennis Nino Clasen (Germany). The design is obviously intended to imitate a security camera whilst providing a habitat for birds.
Energy saving lamp which cited the traditional light bulb
Designer: Felix Stark (Germany) 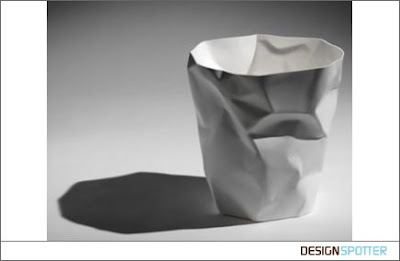 A wastebasket with an identity all its own; Bin Bin looks exactly like the contents it is designed to contain, crushed paper. The product is made of hard polyethylene.
Design: John Brauer 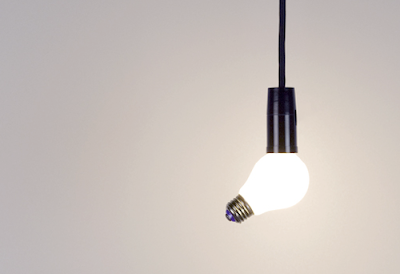 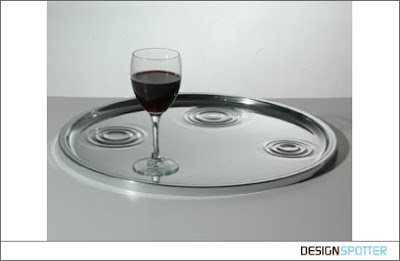 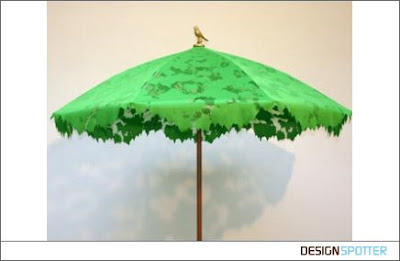 This coffee cup is meant to remind you that getting up is hard, you need strong coffee and a good punch in the face to get going. Funny concept. Designer: j.c.karich (France)
A fun concept for a table which apears to be made from paint. Designer: John Nouanesing (France)


Here are some examples of work by different designers which I really like.
These ideas although somewhat novel are simple and fun but one of they main reasons I like them so much is because they can challenge your perception of the object.
Posted by Paul at 14:07 No comments: 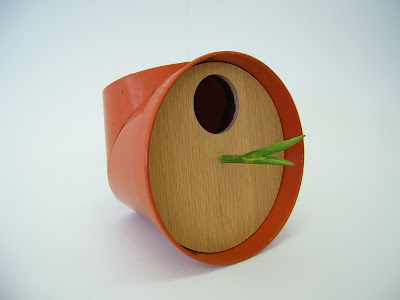 This is my favourite piece of work so far.
This was the result of our final project for year two. The project was called "waste aware" and was ran in connection with the Creative Waste Exchange (CWE), a company which collects a large variety of industrial and household waste products which would otherwise end up in the skip. The CWE allows people to come in and purchase these items for a significantly reduced price allowing the product to gain a second life.
Our aim was to take something which was otherwise considered to be waste and redesign it a new function and life.
I chose the plant pot because it is a mass produced item which creates a great deal of waste.
My initial ideas were ok but failed to use the entire pot and as a result would still be contributing to waste.
My final idea, seen above, was much more successful. There was no waste because the whole plant pot is used along with some other material to construct the face and the perch.
One of the aspects that I love about this design is its diversity. The final product can look totally different depending on the materials used. Meanwhile the way in which the birdhouse is fixed depends on the degree at which the face is set, for example, the one shown above is designed to hang from tree branches.
Posted by Paul at 10:53 2 comments: 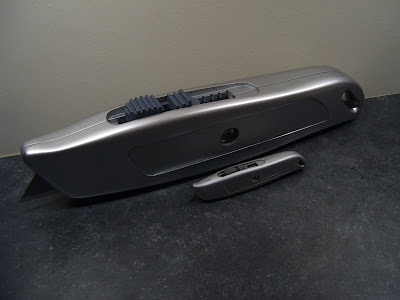 This image is of a scale model stanley knife.
As part of a model making project we were set the task of replicating objects at two or three times actual size.
Seen here is my model next to the original knife, I was extremely pleased with the outcome of this project.
Posted by Paul at 10:41 No comments: