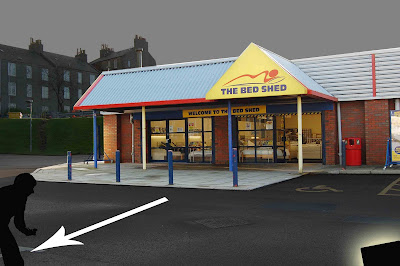 Taking into account the territoriality aspect of the research material, this idea works by trying to keep someone from approaching the building.
Their distance could be measured using Ultrasounds transducers, like the ones used in car parking sensors. This information would be relayed to the necessary components and cause floodlights to eliminate the building. The closer you get to the building the brighter the lights.
Posted by Paul at 05:02 1 comment:

The information gained from the police has proved that the majority of crimes against commercial businesses takes place at night.

These crimes peak in the winter months when the dark evenings set in.
Posted by Paul at 04:17 No comments:

Territory :
"An area that something considers as its own and that it defends against intruders"
Posted by Paul at 04:12 No comments: 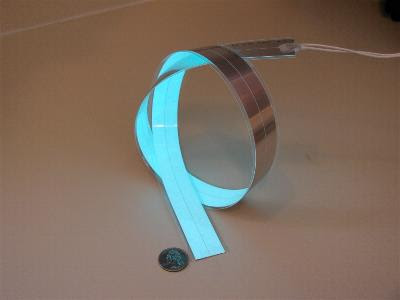 EL Lighting is an innovative light source which comes in strips, sheets or wires.
It could be a possible solution for the light source used to illuminate the territorial features found from my research.
Posted by Paul at 03:44 No comments: 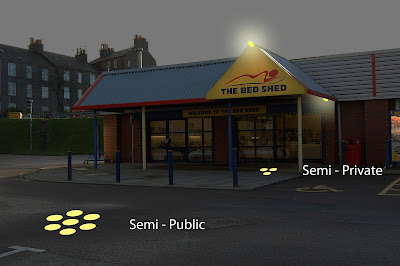 This idea creates lights which are representative of the type of space.

The more lights within the space the more public the space.
The closer you are the more solitary it becomes.
Posted by Paul at 06:59 No comments: 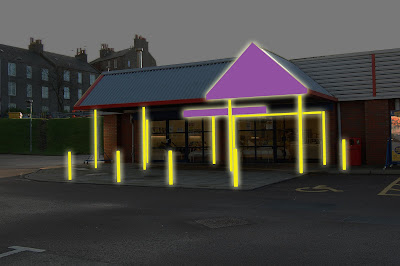 A meeting with the tutors has caused me to rethink the output for my project.
I am trying to integrate it with elements from my research, mainly the territoriality aspect, to try and make a product which will have an effect on a person within an environment by reinstating this notion of territorial.
In this idea the territorial markers are eluminated in the dark. These could be eluminated all the time, or activated by trip sensors etc.
Posted by Paul at 05:50 No comments: 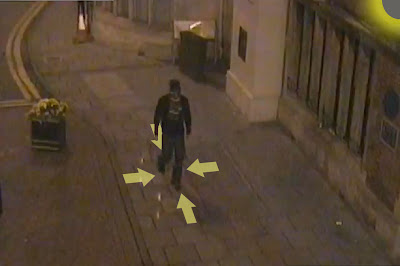 Projecting objects which draw attention to the intruder effect the environment but I feel that by not making the intruder visible the product will not be as effective as a deterrent.
Posted by Paul at 09:04 1 comment: 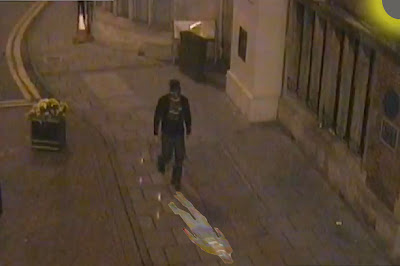 Inspired by an earlier post this idea would project a live video feed of the intruder on the ground in front of them, with the intention of informing them that their actions are being recorded, processed and fed back to them, effecting the psychological mindset of an intruder but also the physical environment giving the product more chance of working as an affective deterrent. 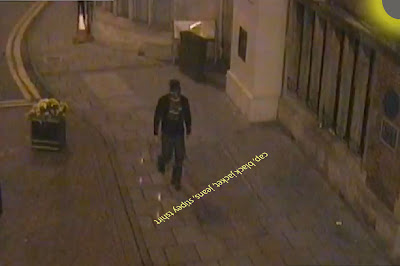 A nice idea but practically impossible to implement as it would require too much computing etc to not only categorise items of clothing but also to accurately feed the information back to intruders as a miss description could cause them to believe the product is faulty.

Unfortunately it also has the problem of the initial projection based concept which is that it wouldn't affect enough of the environment in order to create an effective deterrent.
Posted by Paul at 08:19 No comments: 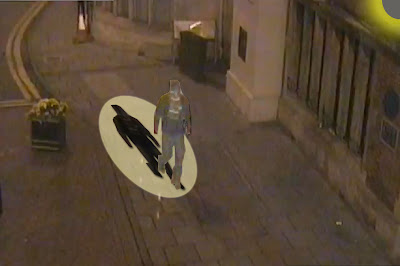 This idea could work.
It has the benefit of effecting intruders or two levels like the talking cameras from an earlier post, but also would require a combination of technology and practice to improve its effectiveness, like the smart CCTV also from a previous post.
Posted by Paul at 08:18 No comments: 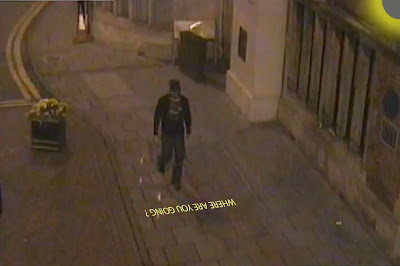 The projection of questions would be fairly simple to create as a product and would help to influence peoples actions by questioning there presence however I don’t feel the product does enough to affect the environment or the intruder and would fail to deter crime.
Posted by Paul at 08:17 No comments: 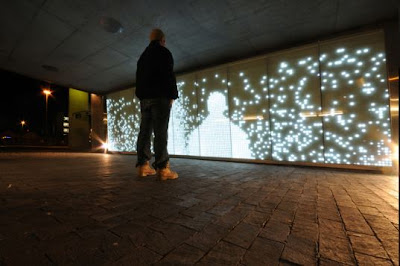 This was an interactive wall in Norway which turned shadows into light.

An interesting twist on the work of Philip Worthington.
This would make for a really nice product that projects shadows as images or light.
Posted by Paul at 04:28 No comments: 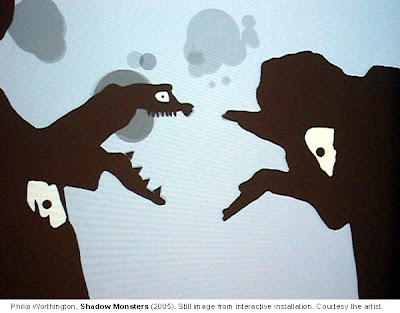 Phillip Worthington made this piece called shadow monsters which altered the shadow cast by user.
The results were totally random and were generated depending on the movements of the user.

Again this is an example of something which could work as a security type product which would interact directly with the intruder causing him/her to think again about what they were about to do. 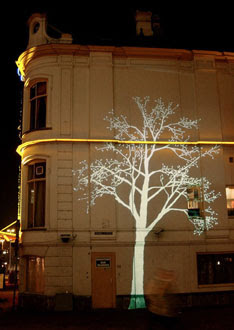 This is a piece of work by Simon Heijdens which interacts using the movement of passers by.
A piece like this, using projections which change to give a response to the movement of someone within a given environment could be an output for my project as the interactive nature could help to influence peoples actions.
Posted by Paul at 04:07 No comments: 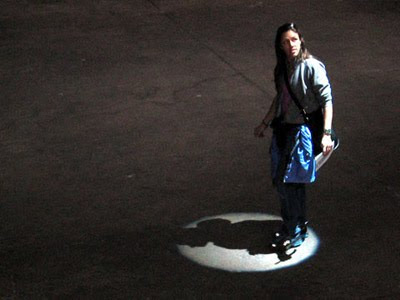 This was an art instillation from 2002, by Marie Sester.
One of the ideas I had for my project was to create a security light which when triggered would cause a spotlight to shine on and track the person who triggered the light.
There are a couple of increased advantages of having a targeted light source over a floodlight.
The targeted light source would reduce the amount of property that is made visible then that of a flood light reducing the visibility for an intruder.
It would also put a great deal more emphasis on the intruder, singling him/her out in an environment. There is also the added factor of not being able to escape from the light which increases discomfort.
The only way you could escape the light would be to remove yourself from the area which, according to my survey results, is the overall objective of a security product.
Posted by Paul at 03:28 No comments:

I have decided to use controlled convergence as a tool for concept selection, I can select the ideas that are worth continuing and then develop them further to hopefully come to a final idea. 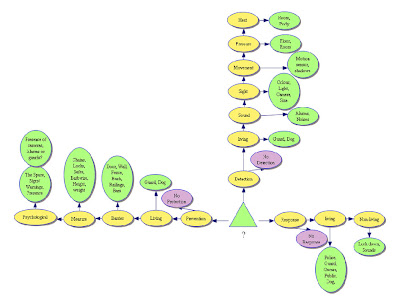 This is my second analysis to help generate ideas.

This one is using some key research material as the core sections of the framework. Each side of the triangle has been assigned a word which categorises the three main factors for creating an effective security system.

By listing lots of different factors under each heading and selecting one from each I was able to generate a large number of different concepts.
Posted by Paul at 04:49 No comments:

A good example of using technology to develop an existing security product thus improving its effectiveness and making it more efficient.

Again this is an aspect which could be applied to my final idea.
Posted by Paul at 03:52 No comments:

This is the type of increased effect I spoke about in a previous post, with an outdoor security product interacting on a number of different levels and senses.

I believe that a combination of impact levels could be key to a practible & successful security product.
Posted by Paul at 03:51 No comments:

The example above shows one such scenario created from this method of idea generation.

Using this as a tool for idea generation and selection, I am going to get into the workshops and start playing around with some materials and parts and components to try and generate some concepts.
Posted by Paul at 05:54 No comments:

Following a lecture on idea generation and selection I have decided to use a technique called morphological analysis. This process will allow me to create a number of different scenarios by mixing and matching different factors to generate numerous ideas.

I am hopeful this will aid in generating some tangible ideas develpoing from my research that I can use to drive the project forward.
Posted by Paul at 03:44 No comments: