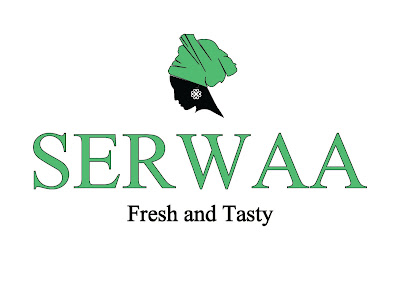 This was the end result of a project for a client in Africa, who wanted to create a brand for his new company.
The logo had to incorporate an African woman as the name Serwaa was taken from the client’s mother. It also had to incorporate the nyame-dua, a religious symbol meaning "tree of god".
Posted by Paul at 03:05 No comments:

This is a logo I designed for a local businessman who has recently started his own import export business.
Posted by Paul at 12:43 19 comments:

From the outset I wanted to create a product that would work.
It had to deter crime in a functional and practical way but convey some of the ideology that was uncovered during my research.
It also needed to address the reason I chose to do the project, which was because of the criminal activity on my father’s business.

I believe that the final product is a viable solution to the problem of business crime and that the product would also be able to transfer over to a residential market.

The primary intention of the final product is to deter crime by changing and influencing the two main areas of physical environment and psychological mindset.

The physical environment is changed by the light source, which illuminates only the intruder and the space immediately surrounding them without making visible the rest of the environment, which can make possible entry points visible to intruders.

The psychological level is affected by the moving light source which removes an aspect of control from the intruder. The inability to escape the light source would not only cause surprise and then discomfort but would hopefully cause the intruder to leave, rather than risk being seen or caught.
Posted by Paul at 07:29 No comments: 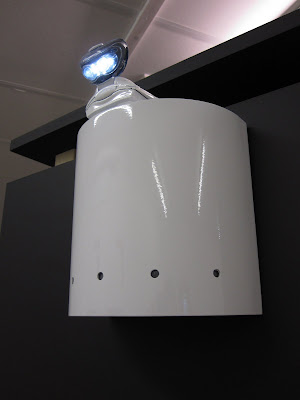 The working prototype model proves the principle behind the product/idea on a much simpler technolocical level.

The model is able to track a target using PIR sensors and light.
Posted by Paul at 07:20 No comments: 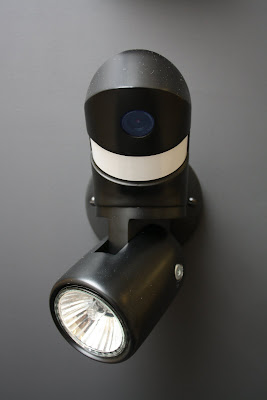 This is a photo of my final surface model.

The final model looks and moves like the final product would. 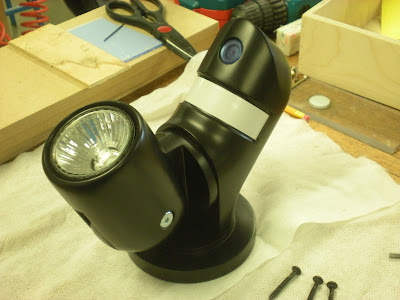 All the parts had to be preassembled before final fitting to ensure the different sections would assemble correctly and space was left to allow for priming and painting.

The final surface model in the image above is able to move as it would on a final product.
This was done using bolts and screw threads, giving the impression of how the product works but also adding to the industrial look of the product..